About Xenos and Proud

This is a small blog about my Warhammer 40,000 hobby. I will try to concentrate on the tactics behind the general game and my Xenos armies but there will be the odd post about random stuff.

Xenos and Proud
Aberdeen, United Kingdom
Xenos and Proud is an 18 year old from Scotland who has been playing 40K for the last 4 years. He loves the 'under-dog' xenos armies, namely his Tyranid Gorgon splinter fleet, his Saim-Hann windrider host, his Tau Vleastean Hunter-cadre and the newest addition, the Shadowfax Corsairs. Although his tactics are mostly 'borrowed', his painting skills still 'developing' and his luck becoming evermore 'ridiculous' he continues to play, paint and roll in the hope that one day things will get better.

Thanks to my friend, a new forum has come to my attention, one that started recently but I've been wanting for years, ever since I started Eldar. Yup, it's an Eldar forum!

The Eldar Resplendent forum is still young (ironically) but thanks to the new codex I think it has a huge potential to help all the newbies who are converting to our web-ways *haha*. I hope to be quite active on this forum and sharing my 'wisdom', though will surely be getting a lot of ideas from it too.

I encourage all Eldar players, new and old to try this forum and look around.

So, see you on the web-way, 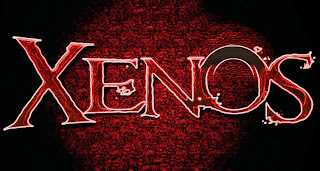 So I just finished the second round of Conflict Scotland 2013 and am standing on 2 solid wins for the Saim-Hann Windriders! Conflict Scotland is an event where the major GW shops in Scotland send teams down to GW HQ, Warhammer World to compete in an Invasion style tournament, mainly to see which is the best shop! It's tense at the moment as the final game is worth the most points but as a general feeling it seems that its too close to call.

So, the games: my first game was against a Sisters of Battle army in a Relic, Hammer and Anvil mission. Saint Celestine was a huge threat and pain but ultimately the quick jetbikes snatched the relic and saved the day. But not after my new Crimson Hunter was shot down the second it arrived! The army was very well painted and the woman commanding it was great fun to play, thanks.

The second game was against a Chaos Nurgle mark list with a Land Raider, Terminators, two squads of Rhino-riding marines and a Defiler who was the bane of all my tanks. It was night-fighting first turn which let me survive to turn to where I cracked both Rhinos and murdered all but 2 of the marines inside with Fire Prism and Nightspinner blasts. My opponent had some horrendous luck but took it like a champ and it paid off as for the rest of the game the remaining Defiler and land Raider refused to give up any more killpoints whilst killing all of my tanks until finally the Raider cracked and I won by mopping up the Terminator killpoint inside. Tense game T, thanks.

So I'm now in-it-to-win-it, all WAAC away for the final game! Then the long bus ride home...


FINAL GAME UPDATE:  My last game was against a dark eldar army, filled with ravagers and venoms with a sprinkling of bikes and scourages, basically I was nervous. Even worse was when we started and he got first turn and it was night fighting. I had reserved all of the bikes and castled the tanks so that at turn 2 I was still alive though hadn't killed much either. Then everything came on, the bikes and the hunter and the tanks started shooting. I can't remember exactly what I killed but it was about 1/3 of the tanks and all of the bikes and scourages. Turn 3 for me was a disaster as he passed every single flickerfield save but it was made up for in turn 4 where he couldn't pass any and I rolled only explosions. By then though all but 2 of my bikes were dead, the fire prisms were in flames and the hunter was stunned. But thankfully I was the one who had come off better in the intense fight and the last turns I was thankful for the nightspinner as it cleared the objective and killed the warlord. In-fact, the Nightspinner was the real MVP, really won me this game and I'm so glad I took it over the farseer. This game was also where I really felt on edge, like I was on the verge of losing all the time, but I really wantedto win and I'm sorry to say that I was a horrible WAAC player. Sorry G, you're a very very worthy opponent. PLACEMENT ANNOUNCEMENT: I knew I did well in gaming scores but I never would've thought that my painting would get full points too. I ended up taking home the gold (no actual gold sadly) in my second proper tournament. 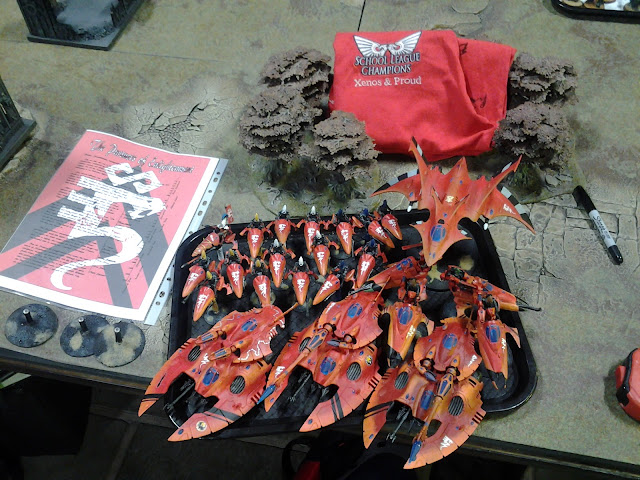 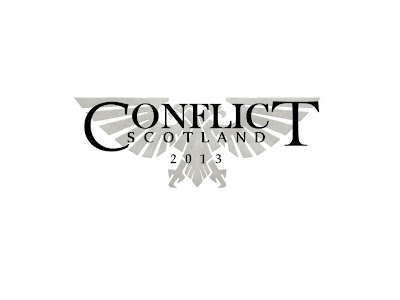 I've signed myself up for this year's Conflict Scotland, an event hosted in Warhammer World, using the  'Invasion' system. It is a fairly interesting event in that the points awarded for wins/draws/losses escalates as you play more games and also as 40% of the total points is from 'soft' scores, army background and painting.

I haven't had my ear to the ground the last year about competitive Warhammer so I'm glad I've got this event to look forward to and practice for. It does mean that I'm struggling to decide on an army list but after a week of work, this is my first attempt.

I will be practising with this list, tweaking it where I can, but from what I heard today, by the time Conflict rolls around, I'll be using an updated codex....

This is a campaign I've written, similar to Forgeworlds Imperial Armour series, to describe the background to both my Tau and Tyranids.

I've got more to write including some unit rules and missions but for now, here's the fluff!

The Pirates in Purple

Been a while but not in vain! I have been working on completing my Corsair pirate band and am nearing my goal. Here's my efforts so far:

So, there's still some details to do like the green gems but these pirates are ready for combat! Indeed I had a game against a Nurgle Chaos Marine with Nurgle Demon allies army and managed to pull out a draw against the super tough troops. Love these guys, their speed and their firepower

Here is a run-down of the list I use though I am looking to tweak it now that the models are nearly done, any suggestions?


That's 1500 with tons of upgrades so I can easily squeeze another unit in there, what would you suggest?
Posted by Xenos and Proud at 15:19 2 comments: